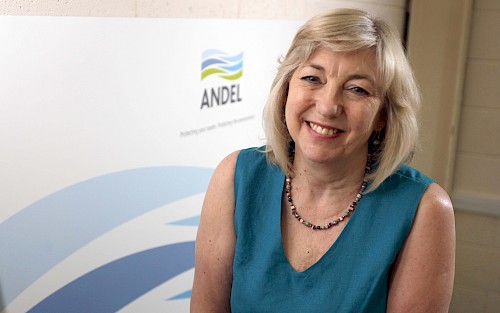 After 27 years’ service, Julie Greenwood is to retire from her position as managing director of Andel, Britain’s largest manufacturer of specialist in-building water, oil and gas leak detection systems.

Julie, who will retire at the end of July, was the very first Andel employee when she joined in 1992 and as the company grew, she rose up through the ranks eventually becoming MD in 2014.

She started in an admin role helping company founder, Ian Pogson and was promoted to General Manager, Operations Director and in 2014, became MD.

When Julie took over as MD, Andel’s annual turnover was £2.3m. Today it is £5.4m - 136% growth over five years. The company is also now the biggest employer in Marsden with more than 60 employees.

In June 1992, the late Ian Pogson started the business from his garden shed creating a leak detection system like no other on the market. In the early days, Pogson employed just a handful of staff, including Julie, to support the development and manufacturing of his new Floodline system.

She said: ‘Taking up the reins from Ian was an emotional experience. Being with Ian from the start and helping him to grow and expand the business was challenging, demanding and fun. We worked through the highs and lows, like any other SME during the rollercoaster of the economic climate.

‘I’m extremely proud to have worked for Andel for 27 years and to have led the company for the past five. I feel very lucky to have worked with talented and loyal people throughout that time. We’re like family.

‘Andel has always had and will continue to have a “can do, will do” mentality. I am proud to say I continued Ian’s legacy, but at the same time ensured a stable platform to grow the business.

‘The last few years have seen us investing in R&D to develop our award-winning products which will allow future expansion not only in the UK but also our export markets. So, I’m certain that Andel will continue to thrive once I’ve departed.”

Julie highlights of the past 27 years include:

Winning the Queen’s Award for Innovation and becoming one of the success stories of the 2012 London Olympics – installing and commissioning several leak detection systems in the main stadium, the white-water canoe course and the Olympic village.

Installing its Floodline system in prestigious London buildings including the Shard, the Houses of Parliament, the O2, the ‘Walkie Talkie’ building and Canary Wharf.

Winning a £75,000 contract to install water leak detection systems on each floor of Tower 1 and Tower 2 in Marina Bay Financial Centre in Singapore.

Julie will be succeeded by Peter Double, currently operations director.