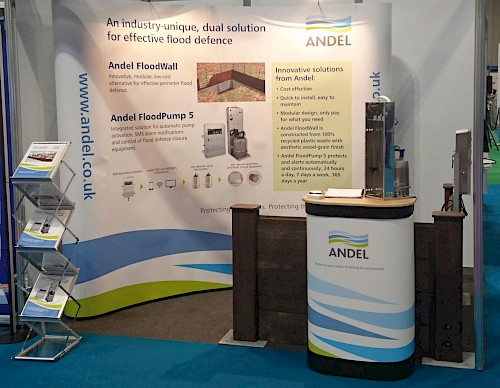 The products were developed as part of Andel’s record £1.2m investment in R & D and enquiries worth £1.75m have already been made for the two products – flood defence and containment system, Andel FloodWall and multi-functional pump alarm system, Andel FloodPump 5. The enquiries have come from across the UK, including three from the Environment Agency itself.

Andel’s semi-permanent FloodWall is suitable for commercial and domestic applications and is made from recycled plastic and reinforced with steel to withstand the forces of flooding. Andel FloodPump 5 can activate multiple pumps on detection of water, activate closure devices such as automatic flood gates and sends alert signals via SMS to let owners know the actions taken to protect the property.

Mark Harris, commercial director at Andel, said: “The response to these two new products at FloodExpo has been unprecedented, we are clearly meeting the key needs of the flood defence industry. As well as the huge number of enquiries, numerous companies have asked to become approved installers so it’s set to be a massive growth area for us. As with many of our other products, those for flood defence are designed and manufactured in-house so we expect to be very busy in the coming months.”

Andel’s client list includes HM The Queen and HM Government (including the NHS, Ministry of Defence, Home Office and DEFRA). The company has worked across all major industry sectors in the UK and globally with customers including the London Stock Exchange, Unilever, Land Rover, HSBC, Vodafone, the British Museum, The Pentagon and Hong Kong International Airport.