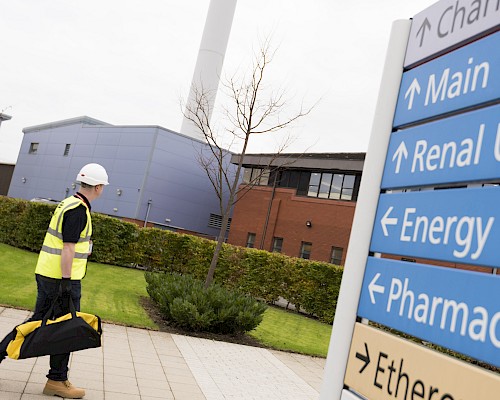 The Huddersfield-based company will be carrying out specialist works associated with the oil storage facilities for the hospital to ensure it fully complies with current regulations.

Andel was appointed following an open tender process after NHS Greater Glasgow and Clyde health board (GG&C) commissioned a review into the oil storage facilities across several of their sites.

Commercial Director, Mark Harris, said: ‘Every hospital has standby generators in case of mains power loss. Those generators run on oil so every hospital stores tens if not hundreds of thousands of litres of oil.

‘The storage of oil is very carefully regulated. Like England, Scotland has very prescriptive rules around oil storage for which failure to comply with The Water Environment (Oil Storage) (Scotland) 2006 Regulations is a criminal offence fineable up to £40,000.

‘We take our role very seriously in assisting in this field of expertise and are pleased to have been appointed by Glasgow Royal Infirmary to ensure the site obtains a very high compliance against the oil storage regulations.’

NHS Greater Glasgow & Clyde's General Manager (Estates), Alan Gallacher, said: ‘We appointed Andel because of their expertise, value for money, excellent references and in depth knowledge of all aspects relating to the regulations around oil storage. This site is one of the largest acute hospitals in Scotland and as such its strategic importance to NHSGG&C means that all potential environmental risks are either reduced or minimised.