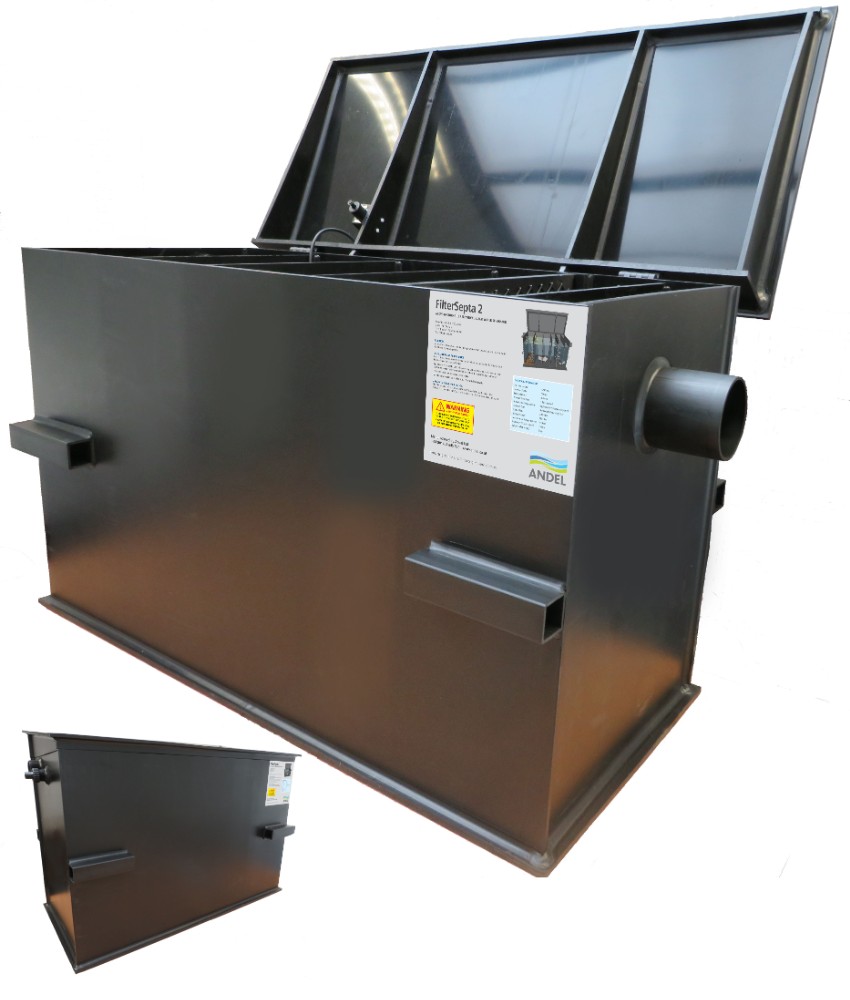 FilterSepta® is designed for site operators concerned that to be absolutely safe and due to site conditions, their existing oil and water separating pump systems may need additional support.

FilterSepta® is an additional and highly cost-effective, secondary containment safeguard for sites where extra caution is required and is recommended for environmentally critical sites and/or where there is concern about pumped water discharge through soak-away or surface water drainage where there is no underground drainage interceptor or separator. FilterSepta® eliminates the need for costly underground interceptor or separator tanks to be installed and maintained.

FilterSepta® performs to the requirements of a Class 1 full retention oil/water separator and relevant section EN858-1:2002  under test conditions.

FilterSepta® is ideal for both retro-fit and new installations. FilterSepta® works as an above-ground interceptor and filter system and is ideally partnered with Andel's BundGuard®. In rigorous tests, BundGuard® is shown to separate oil and water extremely effectively, in fact less than 5 parts per million of oil present in pumped discharge water. FilterSepta removes any oil or debris, however small, still present in the pumped water which allows discharge through existing surface water drainage.

Water is pumped into the first chamber through a T-section which prevents the bottom of the chamber being disturbed by the water flow. Any silt and heavy solids will settle at the bottom of the chamber as the outlet to the next chamber is at a high level. Free oil will also separate and form a layer at the top and is allowed to flow in to the next chamber.

The outlet to the third chamber is at a lower level, so only water that is free of free oil is allowed to pass through. If over time there is a significant build-up of oil in the second chamber, there is an oil sensor that will shut off the BundGuard®, which in turn will alert the site of an issue, allowing simple maintenance to deal with the problem.

Gravity balances out each chamber from the pumped water entering the first chamber, which progressively reduces the flow from one chamber to the next chamber, giving more time for any suspended solids to fall to the bottom of the chambers.

The final stage before discharge is for the water to flow through two Coalescing Filters that serve to remove any remaining suspended solids and emulsified oils as in a Class 1 interceptor.

The system should be regularly inspected and serviced at least every six months. Recharge packs are available from Andel.

Typical flow rates are around 10 to 120 litres per minute

Performance figures may vary and are dependent upon site conditions and specifications.

Personal protective equipment should be used during maintenance of the FilterSepta® unit and when handling contaminated material.

With the introduction of more stringent regulations, operators with no underground interceptor or separator may be concerned that to be absolutely safe their existing oil/water separating pump systems may need additional support or back up.